He would go to a little store somewhere in India and for a rupee the owner would randomly get one of the copied DVDs in a pile hidden behind the balcony and rent it to him. It could be anything, from the top american production that was still in cinema, to trashiest low-budget Vietnamese rereading of the Trojan war, and he couldn’t choose. That’s how Akshat Verma, the Indian screenwriter who wrote the great Indian comedy Delhi Belly, got a taste for cinema. At least that’s what Daniel Scheffler, a writer for The San Francisco Chronicle  told me the other day. Well, it sounded very true to me —mainly because before I entered that room, to apply for my visa to the UK, I had never heard of Daniel or The San Francisco Chronicle or Akshat or the film Delhi Belly itself.

As Mahatma Gandhi used to say: “You idiots, can’t you see that people are more important than money” —that may not be an accurate quote.

You just have no idea of how many good stuff you can learn when you interact with people.

When  was the last time you did something for the first time? Well, today I watched an Indian movie for the first time. Actually, not. I watched Slumdog Milionaire some years ago. But it felt like the first time. Mainly because this movie showed a side of India that I didn’t pay much attention in Slumdog. One thing I was told, and that is very true, is that every Indian movie has dancing and a wedding. But what really caught my attention was the economic aspects of India that the movie unveiled. Old cars and old motorcycles, old houses and precarious water pipes. In the movie three guys lived together and divided the rent. All of them had normal middle class jobs. One was a cartoonist, one was a journalist, and the last one was a photographer. And nonetheless they had problems to pay the rent of an old and terrible apartment without proper water supply.

Brazil will eradicate poverty there in three years. The Indian President Abdul Kalam said at the first press conference after his election that India would do this in twenty years. I’m an optimist, today we are far better than fifty years ago, and I believe that in twenty years we will get a lot smarter. I believe in a better future. But I will leave that for another post, now let’s go back to meeting people.

Today was my first day at University here in London, and as opposed to many other environments, although I wasn’t speaking my native language and I was a foreigner I didn’t feel like an outsider at all. I met a lot of people with a bunch of different backgrounds, people from all over the world, and my first Indian friends. I was looking forward to making some Indian friends, I have a lot to ask. I’m thinking about starting to study the Indian economy. Sounds like a very interesting subject and has a lot to do with Brazilian economy. But as I was saying, I also met a couple of professors and some people from the student union. They were all very nice and thanks to this interaction I already have a couple of meetings to go to, and I was invited to show my piano abilities at a musical branch of the University. All that sounds like a lot of wasted time, but in fact it isn’t. You never know who knows who, so, by getting to know everyone you may be opening an unexpected door. For example, I am planning on taking on a job, being acquainted to professors and people with knowledge can be excellent to gain some indications. If they look at me and see some qualities in me, and if they like me they may help me finding a better than average job.

It is said that we are six people away from anyone in the world, and that is completely true —actually I guess we may be even closer to everyone. This connection, although seemingly lousy, can be quite beneficial for you if you know how to use it. I will give you a quick example:

Summer holiday, my girlfriend and her family were going to Recife – Brazil. They made a connection in Rio, got there at night and would leave the following night. The question was where to spend the night for cheap? Well the cheapest they could get on a hotel room for two was about 150 pounds, that would be 300 pounds the night for the four of them. But luckily she is my girlfriend, and thus she can partake of my contact list. Having lived 17 years of my life in Rio I still had a bunch of contacts. The outcome: thanks to my “influence” they spent the night for free in a nice house, had free meals and a free tour around the city. All of that just because she knew me and I was willing to help her and her family. 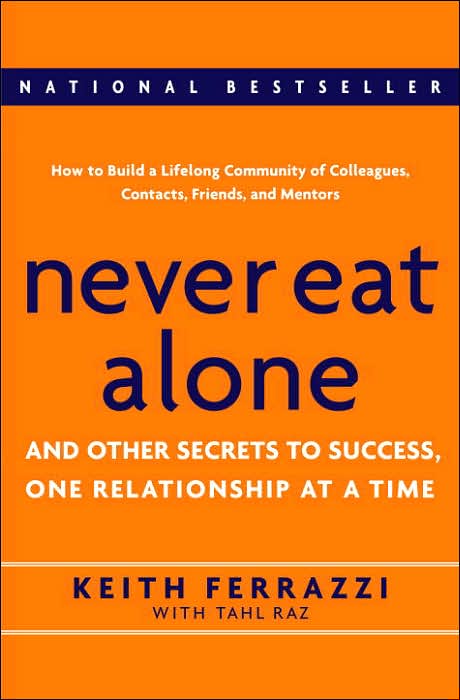 So the idea is: get to know as many people as you possibly can, make them like you, do something for them —don’t be a vampire, if you just take you aren’t adding any value to the cycle, and besides, no one wants to help a vampire— and then you will have your way to the top. But also, don’t get to know people only wanting to get something from them, otherwise you will tend to pay attention only to people who can benefit you in some way. And then you turn into an ass-kisser—not good for your image. You don’t get ahead by kissing asses (well sometimes people do, but don’t be this kind of person), you get ahead by adding value.

Oh, and additionally, I firmly believe that your attitude towards a situation highly influences the outcome. So, every time you say something will go wrong, you are actually contributing to its failure. Just as every time you have a positive attitude your winning chances go up.